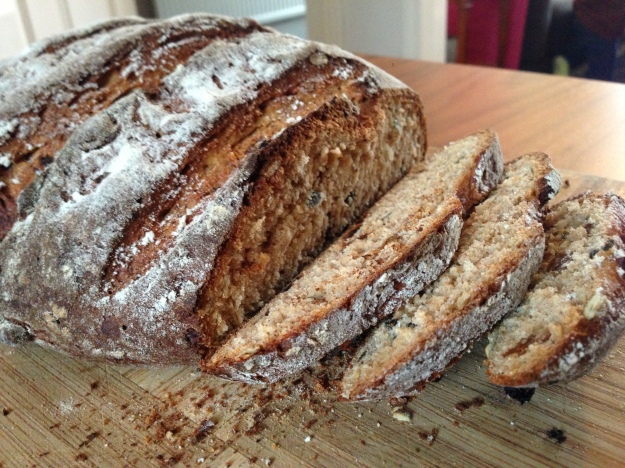 I have a 270km bike race in four weeks and I’ve been on Old Red twice since Jan. And it’s snowing.

I know it’s an idiotic exercise to use this as evidence to attack the general understanding that the planet is warming up, but I’ve had enough – I’m going to write a puerile letter to the Daily Mail and have a rant. Along with the other idiots.

Anyway, while I enjoyed being wheat-free-me for a month, I found myself this morning with time on my hands (given the lack of other options, due the fact that it’s snowing) along with a jar full of dried fruit and a mind to experiment, so it was time to throw off the anti-gluten shackles.

I don’t really know if this is a real recipe, but it really worked for me, so I’d recommend it. Here’s how it goes:

Mix about 300g of good quality organic wholemeal flour with yeast, a few tablespoons of caster suger, milk and yoghurt, in quantities that will give a dough of good kneading consistency. then add a few handfuls of dried fruit and almonds – I used sultanas, rasins and dates. Once you have kneaded for ten minutes, put the dough back into the mixing bowl covered with cling-film and leave to prove in a warm place for at least three hours. Once proved, set the oven to maximum heat, reform the dough into your preferred loaf shape and place it on your baking sheet. Score the top, dust it with flour and cover it again with the cling-film. Once the oven has heated up, the bread will have completed its second prove. Chuck it in the oven along with a glass of boiling water (just throw the water into the bottom of the oven) and close the door quickly. After about 10 minutes, throw it another glass of boiling water, and after thirty five minutes, the bread should be perfect…

Best served toasted with lots of butter – it’s a bit like a cross between bread and pannetone. Bene.