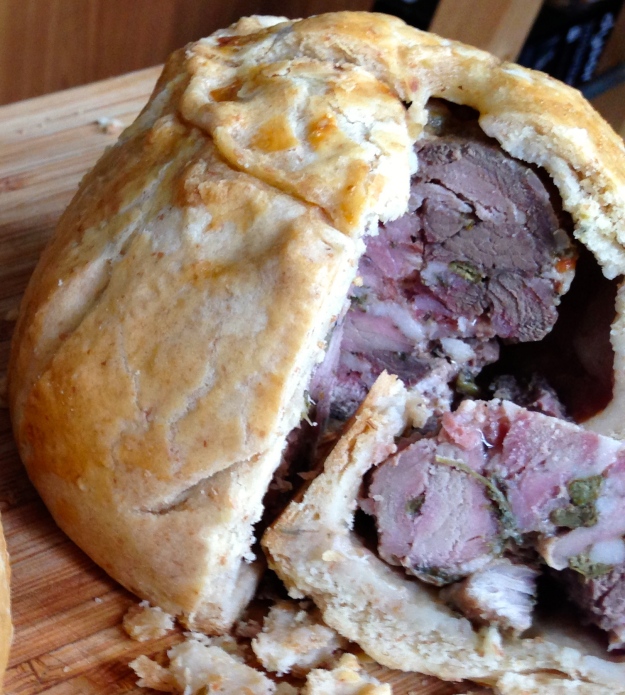 In fact it’s a pork and venison pie, but my copy fitting urges overcame me.

As I look back at the goings-on of the last two weeks, it’s hard to remember a period in recent times where there was more happening in the world (or at least the world that I consciously inhabit). New York was turned upside down by Sandy, turning the lights out on businesses right across Manhattan and effectively shutting down the city for over a week, and yet this, which in a quiet week would have been a major news event here in the UK, was largely relegated to a few shots of floating cars and reporters being blown over by the wind. The world held its breath as Obama managed to cling on to power, leaving 48% of Americans unhappy but 99% of the rest of the planet extremely relieved. But the story that seems to have gripped our nation, and that threatens to turn one of our greatest institutions upside down, is that of a grubby little man who died just over a year ago, and who during his life, horribly exploited countless children supposedly in his care. But what stands out for me in all of this, is not so much the ever growing list of accounts that are being surfaced, but more, the way in which (as often seems to have been the case in recent news stories – hacking, expenses for example) the story so quickly transcended the individual that it centred around and exploded with such force that it impacted so many peoples’ lives who were in no way implicated in or impacted by the events at the time. And today, we have reached the point where Lord McAlpine has been wrongly accused of being a paedophile, Newsnight has twice in two weeks been threatened with immediate extinction, The director general of the BBC, (only in his post for 54 days) is forced to resign and now Andrew Marr is debating with the home secretary whether the institution of the BBC itself is now under threat.

What I find sad is the fact that our capacity as a culture to accept honest mistakes seems to have diminished to the point where we simply can’t do anything any more (and to be clear, I’m talking about Entwistle here, not the grubby little man). The cynicism of british journalism is for me, one of the most depressing things about living in this country. What makes it worse is that it seems to have rubbed off on the rest of us to the extent that it’s now become a stubborn stain on the fingers of our national psyche. And you can see it everywhere – we complain about everything. Everything. “But that’s nothing new!” I hear you exclaim. I have to disagree – it may have always been there, but the noise-level of discontent has risen steadily in the past decade to the point where everyone expects everything and everyone expects perfection. At all times. It’s unrealistic folks – get real and start being more accepting of an imperfect world. It will probably make you happier. And of course we should question things, and we should investigate when things go wrong and work out how to make them right, but please – just a little perpective.

I only write these things so that when in a few years time I’m looking for a pork pie recipe, I’ll have a little context to put it in (or I’ll simply scan past the first two paragraphs like you probably just did).

Just found the gallery feature on here, so click on an image below to see a step by step guide on how I got there…