The first day of summer finally decides to announce itself on the 30th of June, ten days after midsummer and with it, the glorious borough of Enfield bursts into colourful life: pitbulls and pasty white bodies parading themselves through the town with their packs of smokey bacon crisps and cans of cider. You can’t help but smile on a day like this though – we’re finally getting our first little bit of summer joy, and by god we’re going to make the most of it (he says, while sitting inside at the computer writing a blog. To be fair though, we’ve been up since six am and we’ve been outside for most of the day so I don’t feel at all guilty. Not one little bit. Ok, maybe a little, but I’ll pop outside in a while I promise).

And for the first time in a long time, the kids finally allow me to cook them something new. I don’t know if it’s because I only have the boys and that they are more easily persuaded when they’re without Immie, or that they finally trust that very little of the food I cook is poisonous, or maybe it’s just because I did it without telling them – either way, I get to have a play.

I think this is called Escalope Milanese in Italy, although strictly that is made with veal rather than pork. Take a pork chop and remove any bone and fat, then bash it into a thin fillet, about 2mm thick. Next, dip it in egg and then cover with seasoned breadcrumbs. Set aside ready to fry. Now simply make my Friday Night Pasta, but this time with Spaghetti. As it is cooking, fry the fillets and serve them with a squeeze of lemon, next to the spaghetti with a splash of olive oil and a handful of fresh oregano. 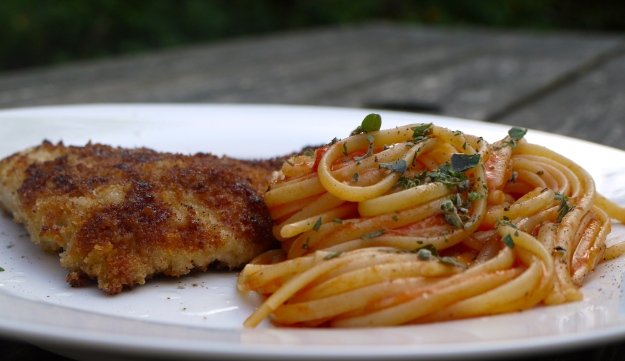 (or strippers and pasta)

The two are entirely unrelated except for the fact that the day I got back from Las Vegas earlier this week, all I had the energy to cook was a carbonara – and that’s really the point – it’s a perfect quick and simple, yet amazingly tasty meal.

As it turns out, I was there to work and as such, didn’t even register a blip on the hedonist’s wallchart of excess, but it was a blast nonetheless. There’s no denying that it is an ultimately shallow, plastic, materialistic and boob-crazed environment, but that’s probably why we love it.

Remember those old mechanical slot machines that would play out a little scene every time you shoved in a coin? Well that pretty much perfectly sums up Las Vegas. Pop in a coin and it dances for you. Once the money has run out, there’s nothing left.

And if you do go, just be careful who you buy breakfast for…

Fill a saucepan with boiling water, a dash of salt and a little oil. Pop in as much spaghetti or linguine as you feel you can handle.

Next, finely chop an onion, a couple of cloves of garlic, a little red chilli if you fancy and four or five strips of streaky smoked bacon. Start by frying the bacon in a little olive oil – I like to get some colour in there – and then add the onion, garlic and chilli and fry gently – you don’t want to burn the onion…

Once the pasta is cooked, drain and add the mixture from the frying pan. Every little bit of it. Now crack an egg into the pasta and stir vigorously allowing the egg to cook slightly from the residual heat of the pasta. Season to taste and serve with generous sprinklings of parmesan.

As ever, make sure you have some good bread and wine to go with it…